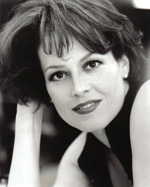 Sigourney Weaver is an American actress best known for her role as Ellen Ripley in the Alien film series, a role for which she has received worldwide recognition. She is also known for her roles in the Ghostbusters films, Gorillas in the Mist, The Ice Storm, Working Girl, Holes, and Avatar.

Weaver is also a three-time Academy Award nominee for her performances in Aliens, Gorillas in the Mist, and Working Girl winning Golden Globe Awards in the latter two films. She has been called ‘The Sci-Fi Queen’ by many on account of her many science fiction and fantasy films.

Weaver was born in Manhattan, New York City, the daughter of Elizabeth Inglis, an English actress, and the NBC television executive and television pioneer Sylvester “Pat” Laflin Weaver. Her uncle, Doodles Weaver, was a comedian and actor. She began using the name “Sigourney Weaver” in 1963 after a minor character in F. Scott Fitzgerald’s novel The Great Gatsby.

Weaver attended the Ethel Walker School, a prep school in Simsbury, Connecticut, where she was made fun of all the time for being a nerd and for her height. She also attended The Chapin School. Sigourney was reportedly 5? 10½? tall by the age of 14, but she only grew another inch during her teens to her adult height of 5? 11½?. Weaver graduated from Stanford University, with a bachelor of arts degree in English in 1972, but she had already begun her involvement in acting, by living in Stanford’s co-ed Beta Chi Community for the Performing Arts. Weaver earned her Master of Fine Arts degree at the Yale University School of Drama in 1974, where one of her appearances was in the chorus in a production of Stephen Sondheim’s musical version of The Frogs, and another was as one of a mob of Roman soldiers alongside Meryl Streep in another production. Weaver later acted in original plays by her friend and classmate Christopher Durang. She later appeared in an “Off Broadway” production of Durang’s comedy Beyond Therapy in 1981, which was directed by the up-and-coming director Jerry Zaks.