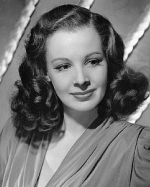 Born Signe Eleonora Cecilia Larsson in 1915, she was one of the youngest students ever accepted at the prestigious Royal Dramatic Theater at the age of 12.

In 1933 she married German film director/cameraman Harry Hasso. She made her first film in 1933 and, in 1940 she moved to the United States where she was signed to a contract by RKO Studios who promoted her as “the next Garbo”. She and Hasso divorced in 1941.

Her first role of note was as “Mademoiselle” in Heaven Can Wait. Her other roles during the 1940s included The Seventh Cross, Johnny Angel, The House on 92nd St., A Scandal in Paris and A Double Life .