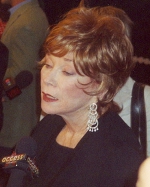 Shirley MacLaine is an American film and theater actress, dancer, activist, and author, well-known for her beliefs in new age spirituality and reincarnation. She has written a large number of autobiographical works, many dealing with her spiritual beliefs as well as her Hollywood career. In 1983, she won the Academy Award for Best Actress for her role in Terms of Endearment. She is the elder sister of actor Warren Beatty.

Named after Shirley Temple, MacLaine was born Shirley MacLean Beaty in Richmond, Virginia. Her father, Ira Owens Beaty, was a professor of psychology, public school administrator, and real estate agent, and her mother, Kathlyn Corinne, was a drama teacher born in Nova Scotia, Canada; MacLaine’s grandparents were also teachers. The family was devoutly Baptist. While she was still a child, MacLaine’s father moved the family from Richmond to Norfolk, and then to Arlington, Virginia and Waverly, eventually taking a position at Arlington’s Thomas Jefferson Junior High School.

Shirley had very weak ankles as a child, so her mother decided to enroll her in ballet class. Strongly motivated by ballet throughout her youth, she never missed a class. In classical romantic pieces like “Romeo & Juliet” and “Sleeping Beauty,” being the tallest in the class, she always played the boys’ role. Eventually, MacLaine decided that professional ballet wasn’t for her. In her own words, she grew too tall and did not have the “beautifully constructed feet”. After leaving ballet, MacLaine pursued Broadway dancing. Eventually, she turned to acting.

She attended Washington-Lee High School, where she was on the cheerleading squad and acted in the school’s productions. The summer before her senior year, she was in New York to try acting on Broadway with some success. After she graduated, she returned and within a year she became an understudy to actress Carol Haney in The Pajama Game; Haney broke her ankle, and MacLaine replaced her. A few months after, with Haney still out of commission, film producer Hal B. Wallis was in the audience, took note of MacLaine, and signed her to work for Paramount Pictures. She later sued Wallis over a contractual dispute, a suit that is credited with ending the old-style studio star system of actor management.