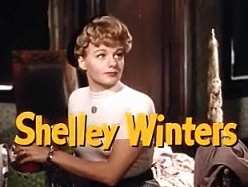 Shelley Winters was an American actress who appeared in dozens of films, as well as on stage and television; her career spanned over fifty years, until her death in 2006. Two-time Academy Award winner, Winters is probably most remembered for her roles in A Place in the Sun, The Big Knife, Lolita, The Night of the Hunter, Alfie, and The Poseidon Adventure.

Winters was born Shirley Schrift in St. Louis, Missouri, the daughter of Jewish parents Rose, a singer with The Muny, and Jonas Schrift, a designer of men’s clothing. Her family moved to Brooklyn, New York when she was three years old. Her sister Blanche Schrift later married George Boroff, who ran The Circle Theatre. She studied at The New School in New York City.

As the New York Times obituary noted, “A major movie presence for more than five decades, Shelley Winters turned herself into a widely-respected actress who won two Oscars.” Winters originally broke into Hollywood as “the Blonde Bombshell”, but quickly tired of the role’s limitations. She washed off her makeup and played against type to set up Elizabeth Taylor’s beauty in A Place in the Sun, still a landmark American film. As the Associated Press reported, the general public was unaware of how serious a craftswoman Winters was. “Although she was in demand as a character actress, Winters continued to study her craft. She attended Charles Laughton’s Shakespeare classes and worked at the Actors Studio, both as student and teacher.” She studied in the Hollywood Studio Club, and in the late 40s, she shared the same apartment with another beginner, Marilyn Monroe.

Her first movie was What a Woman!. Working in films through the 1940s, Winters first achieved stardom with her breakout performance as the victim of insane actor Ronald Colman in George Cukor’s A Double Life, in 1948. She quickly ascended in Hollywood with leading roles in The Great Gatsby and Winchester 73, opposite James Stewart. But it was her performance in A Place in the Sun, a departure from the sexpot image that her studio, Universal Pictures, was building up for her at the time, that first brought Winters her acclaim, earning a nomination for the Academy Award for Best Actress.