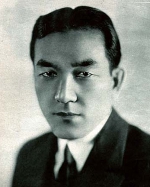 Sessue Hayakawa was a Japanese and American Issei actor who starred in American, Japanese, French, German, and British films. Hayakawa was the first and one of the few Asian actors to find stardom in the United States as well as Europe. Between the mid-1910s and the late 1920s, he was as well known as actors Charlie Chaplin and Douglas Fairbanks. He was one of the highest paid stars of his time; making $5,000 a week in 1915, and $2 million a year via his own production company during the 1920s. He starred in over 80 movies and has two films in the U.S. National Film Registry. His international stardom transitioned both silent films and talkies.

Of his English-language films, Hayakawa is probably best known for his role as Colonel Saito in the film The Bridge on the River Kwai, for which he received a nomination for Academy Award Best Supporting Actor in 1957. In addition to his film acting career, Hayakawa was a theatre actor, film and theatre producer, film director, screenwriter, novelist, martial artist, and an ordained Zen master.

Hayakawa was born Kintaro Hayakawa in Nanaura Village, of Chikura Town, of Minamibos? City, in Chiba Prefecture, Japan on June 10, 1889, the second eldest son of the provincial governor.

From early on Hayakawa was groomed for a career as a naval officer. However at the age of 17, he took a schoolmate's dare to swim to the bottom of a lagoon and ruptured his eardrum. He had been studying at the Naval Academy in Etajima but his record of perfect health was now shattered and he failed the navy's rigorous physical. His formerly proud father was now ashamed and embarrassed of his son. Their relationship became strained.