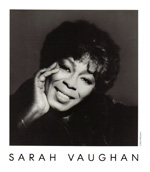 Sarah Lois Vaughan was an American jazz singer, described by Scott Yanow as having "one of the most wondrous voices of the 20th century". She had a contralto vocal range.

Nicknamed "Sailor", "Sassy" and "The Divine One", Sarah Vaughan was a Grammy Award winner. The National Endowment for the Arts bestowed upon her its "highest honor in jazz", the NEA Jazz Masters Award, in 1989.

Sarah Vaughan's father, Asbury "Jake" Vaughan, was a carpenter by trade and played guitar and piano. Her mother, Ada Vaughan, was a laundress and sang in the church choir. Jake and Ada Vaughan migrated to Newark from Virginia during the First World War. Sarah was their only natural child, although in the 1960s they adopted Donna, the child of a woman who traveled on the road with Sarah Vaughan.

The Vaughans lived in a house on Brunswick Street, in Newark, New Jersey, for Sarah's entire childhood. Jake Vaughan was deeply religious and the family was very active in the New Mount Zion Baptist Church on 186 Thomas Street. Sarah began piano lessons at the age of seven, sang in the church choir and occasionally played piano for rehearsals and services.