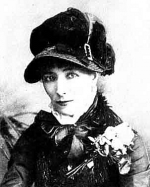 Sarah Bernhardt was a French stage and early film actress, and has been referred to as “the most famous actress the world has ever known”. Bernhardt made her fame on the stages of Europe in the 1870s, and was soon in demand in Europe and the Americas. She developed a reputation as a serious dramatic actress, earning the nickname “The Divine Sarah”.

Bernhardt was born in Paris as Rosine Bernardt, the illegitimate daughter of Julie Bernardt and an unknown father. Julie was one of six children of a widely traveling Jewish spectacle merchant, “vision specialist” and petty criminal, Moritz Baruch Bernardt, and Sara Hirsch. Julie’s father remarried Sara Kinsbergen two weeks after his first wife’s death, and abandoned his family in 1835. Julie left for Paris, where she made a living as a courtesan and was known by the name “Youle”. Sarah would add the letter “H” to both her first and last name. Sarah’s birth records were lost in a fire in 1871, but in order to prove French citizenship, necessary for Légion d’honneur eligibility, she created false birth records, on which she was the daughter of “Judith van Hard” and “Edouard Bernardt” from Le Havre, in later stories either a law student, accountant, naval cadet or naval officer.

As the presence of a baby interfered with her mother’s terrible and stressful life, Sarah was brought up in a pension, and later in a convent. A child of delicate health, she considered becoming a nun, but one of her mother’s reputed lovers, the future Duc de Morny, Napoleon III’s half-brother, decided that she should be an actress. When she was 13, he arranged for her to enter the Conservatoire, the government sponsored school of acting. She was not considered a particularly promising student, and, although she revered some of her teachers, she regarded the Conservatoire’s methods as antiquated and too deeply steeped in tradition.

Much of the uncertainty about Bernhardt’s life arises because of her tendency to exaggerate and distort. Alexandre Dumas, fils described her as a notorious liar.