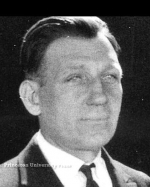 Samuel Louis “Sam” Warner was an American film producer who was the co-founder and chief executive officer of Warner Bros. Studios. He established the studio along with his brothers Harry, Albert, and Jack Warner. Sam Warner is credited with procuring the technology that enabled Warner Bros. to produce the film industry’s first feature-length talking picture, The Jazz Singer. He died in 1927, the day before the film’s enormously successful premiere.

Schmuel “Wonsal” or “Wonskolaser”, later Samuel Louis Warner, was born in a part of the Russian Empire that is now Poland, and possibly in the village of Krasnosielc, He was the son of Benjamin “Wonsal” or “Wonskolaser” a shoe maker born in Krasnosielc, and Pearl Leah Eichelbaum. He came to Baltimore, Maryland with his mother and siblings in October 1889 on the steamship Hermann from Bremen, Germany. Their father had preceded them, immigrating to Baltimore in 1888 and following his trade in shoes and shoe repair. He changed the family name to Warner, which was used thereafter. As in many Jewish immigrant families, some of the children gradually acquired anglicized versions of their Yiddish-sounding names. Schmuel became Samuel.

In Baltimore, Benjamin Warner struggled to make enough money to provide for his growing family. Following the advice of a friend, Benjamin relocated the family to Canada, where he attempted to make a living by bartering tin wares to trappers in exchange for furs. Sons Jacob and David Warner were born in London, Ontario. After two arduous years in Canada, Benjamin and his family returned to Baltimore. Two more children, Sadie and Milton, were added to the household there. In 1896, the family relocated to Youngstown, Ohio, following the lead of Harry Warner, who established a shoe repair shop in the heart of the emerging industrial town. Benjamin worked with his son Harry in the shoe repair shop until he secured a loan to open a meat counter and grocery store in the city’s downtown area. As a child, Samuel found himself trying to find work through a range of various odd jobs.

Samuel Warner, known as “Sam,” was the first member of his family to move into the entertainment industry. In the early 1900s, he formed a business partnership with another Youngstown resident and “took over” the city’s Old Grand Opera House, which he used as a venue for “cheap vaudeville and photoplays”. The venture failed after one summer. Sam then secured a job as a projectionist at Idora Park, a local amusement park. He persuaded the family of the new medium’s possibilities and negotiated the purchase of a Model B Kinetoscope from a projectionist who was “down on his luck”. The purchase price was $1,000. Sam’s interest in film came after seeing Thomas Edison’s The Great Train Robbery while working as an employee at Cedar Point Pleasure Resort in Sandusky, Ohio. During this time, Albert agreed to join Sam and together the two displayed showings of The Great Train Robbery at carnivals throughout the states of Ohio and Pennsylvania; Sam would run the film projector and Albert would sell tickets.