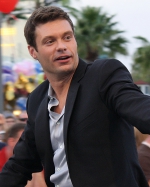 Ryan John Seacrest is an American radio personality, television host, network producer and voice actor. He is the host of On Air with Ryan Seacrest, a nationally syndicated Top 40 radio show that airs on KIIS-FM in Los Angeles and throughout the United States and Canada on Premiere Radio Networks, and the internationally syndicated chart show American Top 40, also syndicated by Premiere Radio Networks. On television, Seacrest hosts E! News, and American Idol.

Seacrest was born on December 24, 1974, in an Atlanta suburb, Dunwoody, Georgia, the son of Constance Marie (née Zullinger, a homemaker, and Gary Lee Seacrest. Connie Seacrest told the Atlanta Journal-Constitution, "Instead of playing with G.I. Joes or Cowboys and Indians, would always have a little microphone and do shows in the house." "But people would call my answering machine just to listen to his voice. They thought I had a professional doing it. That's when I thought, This might be bigger than I think it is."

At age fourteen Seacrest attended and became the "Voice of Dunwoody High School", as his school's regular morning public-address system announcer. "I wore braces and glasses and was fat and got teased about it," Seacrest said, "but I was always very ambitious."

At aged 16, while still attending high school, Seacrest won a hard-to-get internship at WSTR FM, in Atlanta, with Tom Sullivan, who trained him in the many aspects of radio. When the regular DJ called in sick, Sullivan put him on the air for the very first show of his broadcasting career. In a surprise phone call the next day, the station owner told Seacrest that, although he was not a professional, his stint of the night before hadn't been "too bad"