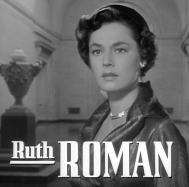 Ruth Roman was an American actress. She was born Norma Roman in the Boston suburb of Lynn, Massachusetts and is of Russian and Polish descent. As a young girl, she pursued her desire to become an actress by enrolling in the prestigious Bishop Lee Dramatic School in Boston. Following completion of her studies Roman headed to Hollywood where she obtained bit parts in several films before being cast in the title role in the thirteen episode serial Jungle Queen. In 1949 she played an important role in the 1949 film, Champion. In one of her most memorable roles, Roman costarred with Farley Granger and Robert Walker in the Alfred Hitchcock thriller Strangers on a Train. Married three times, she had one son, Richard, with her first husband, Mortimer Hall. In the 1950 film Three Secrets, she played a distraught mother waiting to learn whether or not her child survived an airplane crash. In July 1956, Roman and her four-year-old son were passengers on board the SS Andrea Doria ocean liner. They were separated from each other when the ship collided with the MS Stockholm off Nantucket and sank. Roman was rescued and waited at the pier in New York City for her son’s safe arrival aboard one of the rescue ships.

As stage actress, in 1959 she won the Sarah Siddons Award for her work in Chicago theatre. Although she never achieved the level of success in film that many had originally predicted for her, Roman nevertheless worked regularly in film well into the 1960s after which she began making appearances on television shows and movies, including a recurring role in 1965-1966 in NBC’s The Long Hot Summer and for the 1986 season of Knots Landing and on Murder She Wrote, both on CBS. She also guest starred in many television series, such as NBC’s Sam Benedict starring Edmond O’Brien, ABC’s The Bing Crosby Show sitcom and its circus drama, The Greatest Show on Earth starring Jack Palance, and I-Spy starring Robert Culp and Bill Cosby. She also appeared in the early 1960s in both the NBC medical drama The Eleventh Hour and its ABC counterpart, Breaking Point.