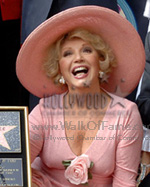 Ruta Lee is a Canadian actress and dancer who appeared as one of the brides in the film Seven Brides for Seven Brothers. She is also known for her guest appearance in The Twilight Zone in 1959, and for being a semi-regular on a number of game shows, including the Hollywood Squares, What's My Line?, and as Alex Trebek's co-host on High Rollers.

Ruta Lee was born Ruta Mary Kilmonis in Montreal, Quebec, and she was the only child of two Lithuanian immigrants. Her father was a tailor and her mother was a homemaker. In 1948, her family moved to Los Angeles, Calif., where she attended high school at Hollywood High School, and began studying acting and appearing in high school plays. She attended both Los Angeles City College and the University of California at Los Angeles.

Ruta worked as a cashier, an usherette, and a candy girl at the famous Grauman's Chinese Theater, but when she was $40.00 short in her cash account at the end of her shift one night, she was dismissed and lost her job.

Lee then got a break with a spot on TV with George Burns and Gracie Allen. She next found an agent, who found her a job in an episode of the Roy Rogers show, followed by a spot on the series Adventures of Superman in 1953. That same year, while doing a small theater production of On the Town, she landed a role in the Academy Award-nominated musical Seven Brides for Seven Brothers. After Seven Brides, Lee appeared in several films including Anything Goes, Funny Face, Witness for the Prosecution, and Marjorie Morningstar with Natalie Wood. In 1962, Ruta appeared in the comedy/western film Sergeants 3 along with Frank Sinatra, Dean Martin, Sammy Davis, Jr., and Peter Lawford.