Rugrats is an American animated television series created by Arlene Klasky, Gábor Csupó, and Paul Germain for Nickelodeon. The series premiered on August 11, 1991 and aired its last episode on June 8, 2004.

The show focuses on four babies and their day-to-day lives, usually involving common life experiences that become adventures in the babies' imaginations. It was one of the first three Nicktoons and also aired on Nick Jr. in 1995.

The show originally revolved around a group of children, including infant Thomas "Tommy" Pickles, toddler Charles "Chuckie" Finster, and the twin-infants Phillip "Phil" and Lillian "Lil" DeVille. The toddlers are able to communicate with each other through baby speak, although viewers can understand them, because it is 'translated'. Often, they mispronounce words or use poor grammar and their speaking is full of malapropisms. An example of this is using the word "poopetrator" instead of "perpetrator." The group is often reluctantly joined by Tommy's cousin, Angelica Pickles. At three years old, Angelica is able to communicate and understand language from both the toddlers and the adults, which she often uses as an advantage when she wants to manipulate either party. She is usually very mean to the babies. Susie Carmichael, who lives across the street from the Pickles, is also able to communicate on the same level as Angelica, though she isn't manipulative. As a result, Angelica and Susie often clash.

In 1998, a new character was introduced. After The Rugrats Movie, in which Tommy's baby brother Dylan "Dil" Pickles is born, he was soon added as a character on the show. As a four month old baby, Dil is not able to communicate with anyone. Later in 2000, after Rugrats in Paris: The Movie was released, Kimi Finster was added as a character. She is Chuckie's stepsister. 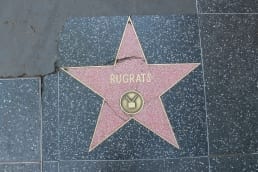