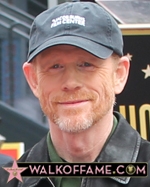 The Hollywood Chamber of Commerce proudly honored legendary actor/director/producer Ron Howard the 2,568th star on the Hollywood Walk of Fame today, December 10, 2015, at 11:30 a.m. PST. The star, in the category of Motion Pictures, was dedicated at 6931 Hollywood Boulevard in front of Madame Tussauds Hollywood.

Helping Hollywood Chamber President/CEO and emcee Leron Gubler to unveil the star were Brian Grazer and Michael Keaton. “Ron Howard is the epitome of the dream-come-true of the entertainment world… starring as a child actor and becoming one of the world’s most prolific filmmakers,” stated Ana Martinez, Producer of the Walk of Fame ceremonies. “We are proud to add him to our Walk of Fame for a rare second time. His first star was dedicated to him on August 19, 1981,  in the category of Television.”

The star ceremony was live-streamed exclusively on www.walkoffame.com.

Ron Howard began his career as an actor. He first appeared in “The Journey” and “The Music Man,” then as ‘Opie’ on the long-running television series “The Andy Griffith Show.” Howard later drew favorable reviews for his performances in the feature films “American Graffiti” and “The Shootist,” and starred in the popular TV series “Happy Days.”

Howard is an Academy Award®-winning filmmaker and one of today’s most esteemed directors, who has helmed some of the most popular films of the past four decades. From the critically acclaimed dramas “A Beautiful Mind” and “Apollo 13” to the hit comedies “Parenthood” and “Splash,” Howard has created some of Hollywood’s most memorable films. Howard’s latest film is the Warner Bros. Pictures and Village Roadshow Pictures film, “In the Heart of the Sea,” which opens on December 11, 2015.

Howard also produced and directed the film adaptation of Peter Morgan’s critically acclaimed play “Frost/Nixon.” The 2009 film was nominated for five Academy Awards®, including Best Picture, and was also nominated for The Darryl F. Zanuck Producer of the Year Award in Theatrical Motion Pictures by the PGA. Many of Howard’s past films have received nods from the Academy, including the hits “Backdraft,” starring Robert De Niro and Kurt Russell; “Parenthood,” starring Steve Martin; and “Cocoon,” which won two Oscars®, including one for Best Supporting Actor for Don Ameche.

Howard’s more recent films include the critically acclaimed drama “Rush,” staring Chris Hemsworth and Daniel Brüel, written by Peter Morgan; and “Made In America,” a music documentary he directed for Showtime, starring Jay Z. He most recently directed the dramatic adventure “In the Heart of the Sea,” starring Hemsworth, based on the book about the true story of the Essex disaster that inspired Herman Melville’s Moby-Dick. Howard just completed filming on the upcoming “Inferno,” his third film based on Dan Brown’s best-selling novels, with Tom Hanks reprising the role of Robert Langdon. He had previously directed Hanks in the adaptations of Brown’s “Angels & Demons” and “The Da Vinci Code.”

Howard has also served as an executive producer on a number of award-winning films and television shows, including the HBO miniseries “From the Earth to the Moon;” FOX’s Emmy Award winner for Best Comedy Series, “Arrested Development,” which he also narrated; NBC’s “Parenthood”; and “Felicity,” among others.

Among the many charities Howard supports are the Boys and Girls Clubs of America and the Jacob Burns Film Center.

Ronald William "Ron" Howard is an American film director and producer, as well as an actor. Howard came to prominence in the 1960s while playing the son of sheriff Andy Taylor, Opie Taylor, on The Andy Griffith Show, and later in the 1970s as Howard Cunningham's son and Arthur Fonzarelli's best friend, Richie Cunningham, on Happy Days. Since retiring from acting, he has directed many films including Splash, Cocoon, Backdraft, Apollo 13, A Beautiful Mind, How the Grinch Stole Christmas, Frost/Nixon, The Da Vinci Code, and Angels & Demons.

In 2003, he was awarded the National Medal of Arts.

Howard was born in Duncan, Oklahoma, the son of Jean Speegle Howard, an actress, and Rance Howard, a director, writer, and actor. His family moved to Burbank, California in 1958, the year before the birth of his younger brother, Clint Howard. Howard graduated from John Burroughs High School, and later attended the University of Southern California's School of Cinematic Arts but did not graduate.

In 1959, he had his first credited film role, in The Journey, and appeared in June Allyson's CBS anthology series The DuPont Show with June Allyson in the episode "Child Lost," as well as The Twilight Zone episode "Walking Distance", about a man who learns that he cannot go home again. 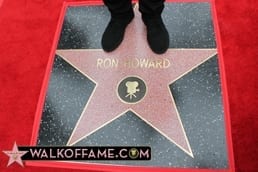