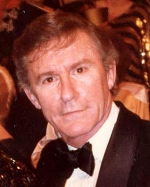 Roderick Andrew Anthony Jude "Roddy" McDowall was an English-born actor and photographer. He was best known as Cornelius and Caesar in the Planet of the Apes film series. He began his long career as a child actor.

McDowall was born in Herne Hill, London, the son of Winsfriede L., an Irish-born aspiring actress, and Thomas Andrew McDowall, a Merchant Mariner. Both of his parents were enthusiastic about the theatre. He had a sister, Virginia. After he had appeared in several British films, McDowall's family came to America because of the Blitz. He then made his first well-known film appearance, at age twelve, playing Huw in How Green Was My Valley. This role made him a household name. He co-starred in Lassie Come Home, on the first of many occasions opposite lifelong friend Elizabeth Taylor. He appeared too as Ken McLaughlin in the 1943 film My Friend Flicka. McDowall then went on to appear in other films, including The Keys of the Kingdom and The White Cliffs of Dover. McDowall continued his career successfully into adulthood, but it was usually in character roles, notably in heavy makeup as various "chimpanzee" characters in four of the Planet of the Apes movies and in the 1974 TV series that followed. During one guest appearance on The Carol Burnett Show, he came out onto the stage in his Planet of the Apes makeup and the look of fright on Carol Burnett's face was reported to be genuine. Other film appearances included Cleopatra, in which he played Octavian and was notoriously nominated for the Academy Award for Best Supporting Actor but was disqualified when accidentally submitted for Best Actor instead; It!, in which he played a Norman Bates-like character reminiscent of Psycho; The Poseidon Adventure, in which he played Acres, a dining room attendant; Dirty Mary, Crazy Larry ; Evil Under the Sun ; Class of 1984 ; Fright Night, in which he played Peter Vincent, a television host and moderator of telecast horror films; and Overboard in which he played a kind-hearted butler. He also appeared on stage and was frequently a guest star on television shows, appearing in such series as the original The Twilight Zone, The Eleventh Hour, Buck Rogers in the 25th Century, Night Gallery, The Invaders, The Carol Burnett Show, Fantasy Island, Columbo and Quantum Leap. 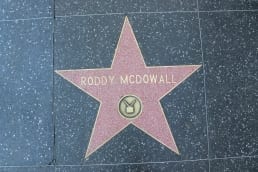