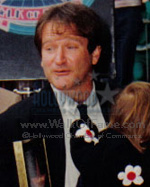 Robin McLaurim Williams is an American actor and comedian.

Rising to fame with his role as the alien Mork in the TV series Mork and Mindy, and later stand-up comedy work, Williams has performed in many feature films since 1980. He won the Academy Award for Best Supporting Actor for his performance in the 1997 film Good Will Hunting. He has also won two Emmy Awards, four Golden Globes, two Screen Actors Guild Awards and five Grammy Awards.

Williams was born in Chicago, Illinois. His mother, Laura, was a former model from New Orleans, Louisiana. His father, Robert Fitzgerald Williams was a senior executive at Ford Motorship in charge of the Midwest area. He is of English, Welsh and Irish descent on his father’s side, and of French descent on his mother’s side. Williams was raised in the Episcopal Church, though his mother practiced Christian Science. He grew up in Bloomfield Hills, Michigan, where he was a student at the Detroit Country Day School, and Marin County, California, where he attended the public Redwood High School. Williams also attended Claremont McKenna College for four years. He has two half-brothers: Todd and McLaurin.

Williams has described himself as a quiet child whose first imitation was of his grandmother to his mother. He did not overcome his shyness until he became involved with his high-school drama department.