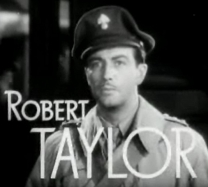 Robert Taylor was an American film and television actor.

Born Spangler Arlington Brugh in Filley, Nebraska, he was the son of Ruth Adaline and Spangler Andrew Brugh, who was a farmer turned doctor. As a teenager, he was a track star and played the cello in his high school orchestra. Upon graduation, he enrolled at Doane College to study music.

While at Doane, he took cello lessons from Professor E. Gray, a man whom he admired and idolized. After Professor Gray announced he was accepting a new position at Pomona College in Los Angeles, Brugh moved to California and enrolled at Pomona. He joined the campus theatre group and was eventually spotted by an MGM talent scout in 1932 after production of Journey’s End.

After Brugh signed a seven-year contract with Metro-Goldwyn-Mayer for $35 a week, his name was changed to Robert Taylor. He made his film debut in the 1934 comedy, Handy Andy, opposite Will Rogers. After appearing in a few small roles, he appeared in one of his first leading roles in Magnificent Obsession, with Irene Dunne. This was followed by Camille, opposite Greta Garbo.