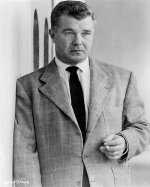 Robert Rossen was an American screenwriter, film director, and producer. After writing and directing for the stage, Rossen moved to Hollywood in 1937. His film career spanned almost three decades. Rossen was twice nominated for an Academy Award for best director and once for best adapted screenplay, winning the Golden Globe Award for Best Director for All the King’s Men. Rossen was twice called before the House Un-American Activities Committee, in 1951 and in 1953. He exercised his Fifth Amendment rights at his first appearance, refusing to state whether he had ever been a Communist. As a result he was unofficially blacklisted by the Hollywood studio bosses. At his second appearance he named 57 people as current or former Communists and was removed from the unofficial blacklist. He returned to filmmaking, although his last film so disillusioned him that he did not work for the last three years of his life.

Robert Rossen, originally known as Robert Rosen, was born on March 16, 1908, and raised on the lower East side of New York City. His father was a Russian-Jewish immigrant rabbi. As a youth Rossen attended New York University, hustled pool and fought some prizefights.

He started his theatrical career as a director and playwright in stock and off-Broadway productions.