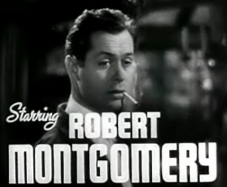 Robert Montgomery was an American actor and director.

Montgomery was born Henry Montgomery Jr. in Beacon, New York, then known as “Fishkill Landing”, the son of Mary Weed and Henry Montgomery, Sr. His early childhood was one of privilege, since his father was president of the New York Rubber Company. When his father committed suicide in 1922 by jumping off the Brooklyn Bridge, the family’s fortune was gone.

Montgomery went to New York City to try his hand at writing and acting. He established a stage career, and became popular enough to turn down an offer to appear opposite Vilma Bánky in the film This Is Heaven. Sharing a stage with George Cukor gave him an in to Hollywood, where, in 1929, he debuted in So This Is College. Montgomery entered the moving picture industry during the revolution of the talkies, which made it more difficult to impress the studio. One writer claimed that Montgomery was able to establish himself because he “proceeded with confidence, agreeable with everyone, eager and willing to take suggestions.” During the production of So This Is College, he learned from and questioned crew members from several departments, including sound men, electricians, set designers, cameramen an film editors. In a later interview, he confessed that “it showed that making a motion picture is a great co-operative project.”

So This Is College gained him several attention as Hollywood’s latest newcomer, and he was put in one production after another, with his popularity growing steadily. He initially played exclusively in comedy roles, but portrayed a character in his first drama film in The Big House. The studio was initially reluctant to assign him in such a role, until “his earnestness, and his convincing arguments, with demonstrations of how he would play the character” won him the assignment. From The Big House on, he was in constant demand. Appearing as Greta Garbo’s romantic interest in Inspiration started him toward stardom with a rush. Norma Shearer chose him to star opposite her in The Divorcee, Strangers May Kiss, and Private Lives, which led to stardom on a high rank. During this time, Montgomery appeared in the first filmed version of When Ladies Meet .