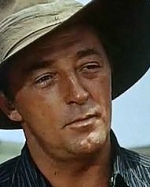 Robert Charles Durman Mitchum was an American film actor, author, composer and singer. Mitchum is largely remembered for his starring roles in several major works of the film noir style, and is considered a forerunner of the anti-heroes prevalent in film during the 1950s and 1960s.

Mitchum was born in Bridgeport, Connecticut into a Methodist family. His mother, Ann Harriet, was a Norwegian immigrant and sea captain’s daughter, and his father, James Thomas Mitchum, was a shipyard and railroad worker. A sister, Annette, was born in 1913. James Mitchum was crushed to death in a railyard accident in Charleston, South Carolina in February 1919, when his son was less than 2 years old. After his death, Ann Mitchum was awarded a government pension, and soon realized she was pregnant. She returned to her family in Connecticut, and married a former British Army major who helped her care for the children. In September 1919 a second son, John, was born. When all of the children were old enough to attend school, Ann found employment as a linotype operator for the Bridgeport Post.

Throughout Mitchum’s childhood, he was known as a prankster, often involved in fistfights and mischief. When he was 12, his mother sent Mitchum to live with his grandparents in Felton, Delaware, where he was promptly expelled from his middle school for scuffling with a principal. A year later, in 1930, he moved in with his older sister, in New York’s Hell’s Kitchen. After being expelled from Haaran High School, he left his sister and traveled throughout the country on railroad cars, taking a number of jobs including as a ditch-digger for the Civilian Conservation Corps and as a professional boxer. He experienced numerous adventures during his years as one of the Depression era’s “wild boys of the road.” At age 14 in Savannah, Georgia, he was arrested for vagrancy and put on a local chain gang. By Mitchum’s own account, he escaped and returned to his family in Delaware. It was during this time, while recovering from injuries that nearly lost him a leg, that he met the woman he would marry, a teenaged Dorothy Spence. He soon went back on the road, eventually riding the rails to California.

Mitchum arrived in Long Beach, California, in 1936, staying again with his sister Julie. Soon the rest of the Mitchum family joined them in Long Beach. During this time he worked as a ghostwriter for astrologer Carroll Righter. It was sister Julie who convinced him to join the local theater guild with her. In his years with the Players Guild of Long Beach, he made a living as a stagehand and occasional bit player in company productions. He also wrote several short pieces which were performed by the guild. According to Lee Server’s biography, Mitchum put a talent for poetry to work writing song lyrics and monologues for his sister Julie’s nightclub performances. In 1940 he returned East to marry Dorothy, taking her back to California. He remained a footloose character until the birth of their first child, Jim, nicknamed Josh. Robert then got a steady job as a machine operator with the Lockheed Aircraft Corporation.