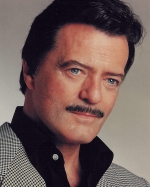 Robert Gerard Goulet was a Canadian/ American entertainer. He rose to international stardom in 1960 as Lancelot in Lerner and Loewe's hit Broadway musical Camelot. His long career as a singer and actor encompassed theatre, radio, television and film.

Goulet was born in Lawrence, Massachusetts, the only son of French Canadian parents Jeanette and Joseph Georges André Goulet, a laborer. Through his father he was a descendant of Zacharie Cloutier. Shortly after his father's death, 13-year-old Robert moved with his mother and sister Claire to Girouxville, Alberta, and he spent his formative years in Canada.

Goulet's rise to fame started at the age of five when his aunts and uncles blackened his face with burnt cork and prompted him to do Al Jolson impressions. Though his performance was well-received by his relatives, the experience was deeply traumatic for the young Goulet, and left him with performance anxiety which plagued him for many years. Despite this stage fright, Goulet was encouraged by his parents to continue performing.

After living in Girouxville, Alberta, for several years, they moved to the provincial capital of Edmonton to take advantage of the performance opportunities offered in the city. There, he attended the famous voice schools founded by Herbert G. Turner and Jean Letourneau, and later became a radio announcer for radio station CKUA. Upon graduating from Victoria Composite high school, Goulet received a scholarship to The Royal Conservatory of Music in Toronto. There, he studied voice with famed oratorio baritones, George Lambert and Ernesto Vinci.