Robert Fuller is an American former television actor and current rancher. In his five decades of television, he's best known for starring roles on the popular 1960s western series Laramie as Jess Harper, and Wagon Train as Cooper Smith, as well as his work for his lead role, Dr. Kelly Brackett, in the popular 1970s medical drama Emergency!, opposite his best friends Julie London and her husband Bobby Troup.

An only child, Fuller was born Buddy Lee in Troy, New York, to Betty Simpson, a dance instructor. Prior to Lee's birth, Simpson married Robert Simpson, Sr., a Naval Academy officer. The family moved to Key West, Florida, where Lee took the name of his parents, becoming Robert Simpson, Jr.. The early highlights of Simpson's life were acting and dancing, and after graduating from the Miami Military Academy in 1952, he traveled to Hollywood with his family, where Fuller's first job was a stunt man. He also worked at the prestigious Grauman's Chinese Theatre. Upon establishing his acting career, he changed his name to "Robert Fuller."

Fuller's first small role was 1952's Above and Beyond. This part led to landing in a few small roles such as I Love Melvin. In 1953, he again had another minor part in Gentlemen Prefer Blondes, which starred Marilyn Monroe, but Fuller's career came to an abrupt halt when he was drafted into the military. He did a tour of duty in Korea, and came back in 1955.

Fuller had considered another career, but at his parents' suggestion, he attended Richard Boone's acting classes, under the tutelage of Sanford Meisner at New York City's Neighborhood Playhouse, and reconsidered. 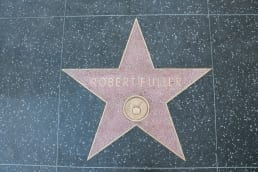