Robert Donat was an English film and stage actor. He is best-known for his roles in Alfred Hitchcock's The 39 Steps and Goodbye, Mr. Chips for which he won an Academy Award for Best Actor.

Donat was born Friedrich Robert Donat in Withington, Manchester, England, to Ernst Emil Donat and his wife Rose Alice who were married at Withington, St Paul, in 1895. He was of English, Polish, German and French descent and was educated at Manchester?s Central High School for Boys.

Donat had a brother, John Donat, who was trapper in Canada and later moved to Shelton, Connecticut. John Donat's children were Jean, Jay, and Peter. He was the owner of Lake George Camp for Girls in Gull Bay, New York, which catered to old New York families.

He made his first stage appearance in 1921 and his film debut in 1932 in Men of Tomorrow. His first great screen success came with The Private Life of Henry VIII, playing Thomas Culpepper. 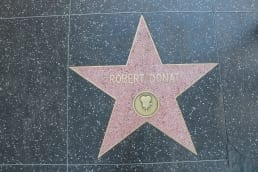