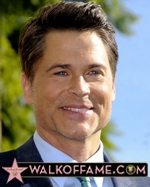 The Hollywood Chamber of Commerce proudly honored actor Rob Lowe with the 2,567th star on the Hollywood Walk of Fame today, Tuesday, December 8, 2015. The star in the category of Television was dedicated in front of the historic Musso & Frank Grill.

Helping emcee and Hollywood Chamber President/CEO Leron Gubler to unveil star were Gwyneth Paltrow, Fred Savage and Tom Barrack, Chairman of Miramax. “Rob Lowe is one of the most popular actors in the industry and has worked on some of the most viewed shows that Hollywood has produced,” stated Leron Gubler, President/CEO of the Hollywood Chamber of Commerce. “We are pleased to welcome him to the Hollywood Walk of Fame. He is a great addition and I know that many fans can agree with that!”

The star ceremony was streamed live exclusively on www.walkoffame.com.

Rob Lowe was born in Charlottesville, Virginia, and raised in Dayton, Ohio, where he began his acting career in local television and theater at the age of eight. After his family relocated to Los Angeles, Lowe began his national acting career starring in the ABC television series “A New Kind of Family.” Today, Lowe’s charismatic talent and palpable success have radiated far beyond the realm of television.

Lowe can currently be seen on FOX’s new hit show, “The Grinder,” and Sky 1’s biggest drama debut since 2012, “You, Me, and the Apocalypse.” He is also currently lending his voice talents to Comedy Central’s “Moonbeam City” as Dazzle Novak, and Disney Channel’s “The Lion Guard” as Simba November 22nd.

For four seasons (from 1999 to 2003) Lowe starred as Sam Seaborn on the hit NBC drama “The West Wing.” During that course of time, the show won a record four consecutive Emmys for Outstanding Drama. His performance in the show garnered Lowe an Emmy nomination, as well as two Golden Globe nominations for Outstanding Lead Actor in a Drama Series. He was nominated three times for the Screen Actors Guild award, winning twice. Lowe was drawn to the role because of his personal love of politics, and his longstanding personal relationship with Martin Sheen, who was cast as PresidentBartlet.

Along with his outstanding work in television and film, Lowe has also achieved distinguished success in theatre. In 2005 Lowe made his West End debut starring in Aaron Sorkin’s “A Few Good Men,” receiving fervent reviews at the Royal Haymarket Theatre in London.  Other theatre credits include the Broadway production of “Little Hotel on the Side” and “Three Sisters” with Lowe playing Tuzenbach.

Lowe’s feature film debut came in 1983 when Francis Ford Coppola cast him in The Outsiders, a remarkable adaptation to the 1967 novel of the same name by S.E. Hinton. He went on to star in other popular dramas such as St. Elmo’s Fire, About Last Night, and Bad Influence, as well as such blockbuster comedies as Wayne’s World and Tommy Boy. After Wayne’s World, Lowe re-teamed with Myers in Austin Powers: The Spy Who Shagged Me.

In 2015, Lowe starred in the Lifetime movie Beautiful and Twisted, based on the true story of the murder of the Fontainebleau hotel heir, opposite Paz Vega and Candice Bergen. In the same year, he debuted his own men’s skincare line, Profile. In July of 2014 he appeared in the Sony Pictures comedy Sex Tape, directed by Jake Kasdan and starring Jason Segel and Cameron Diaz.

Lowe received critical acclaim and a Screen Actors Guild nomination for his starring role in National Geographic Channel’s Emmy nominated Killing Kennedy, which premiered on the National Geographic Channel in 2013 and broke a record to become the network’s most watched telecast. In the film,Lowe stars as iconic President John F. Kennedy, alongside Ginnifer Goodwin as the first lady Jackie, in the film adaptation of the best-selling novel Killing Kennedy by Bill O’Reilly.

Lowe received a Golden Globe nomination for his co-starring role in the 15-time Emmy nominated HBO film Behind the Candelabra, playing the role of Dr. Jack Startz. The film was directed by Steven Soderbergh and produced by Jerry Weintraub.

In 2012, Lowe was seen in The Drew Peterson Story portraying the title character accused of killing his wife. The Lifetime movie shattered records with its ratings.

In 2011 Lowe added author to his credits with the release of his memoir, Stories I Only Tell my Friends. Complete with adolescent anecdotes, Lowe shares astoundingly personal excerpts as he recalls his encounters, experiences, and the audition that changed his life forever. The book was an instant hit, spending consecutive weeks in the top four of The New York Times best sellers, and made it onto GQ’s “Best of 2011” book list. In 2014, his second book, Love Life, was published by Simon & Schuster and opened up to rave reviews and landed a spot on the NY Times Best-Seller list.

In May 2010,  Lowe joined the cast of NBC’s “Parks and Recreation,” where he played the role of Chris Traeger, an auditor who seeks to dig Pawnee, Indiana’s Department of Parks and Recreation, out of its financial abyss. Lowe was also featured in a three-episode appearance on Showtime’s “Californication,” in which he played unpredictable, megawatt movie star Eddie Nero.

Preceding his move to “Parks and Recreation,” Lowe starred in the ABC-TV hit series “Brothers & Sisters” from 2007 to 2010. In 2009, Lowe also starred opposite Ricky Gervais, Jennifer Garner, and Tina Fey in Warner Bros’ The Invention of Lying.

Other film credits include A View from the Top, Class, The Hotel New Hampshire, Oxford Blues, Youngblood, Square Dance, Masquerade, and Mulholland Falls. He has also been successful with highly-rated television miniseries such as “Beach Girls” for Lifetime, “Salem’s Lot” for TNT, “The Christmas Shoes” for CBS and “The Stand” for ABC. 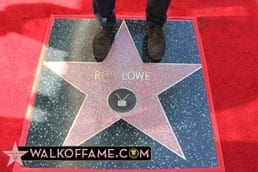