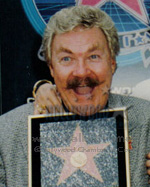 After serving a stint in the Army, Taylor played a wacky, but memorable villain named Wizard Glick in the final episode of The Monkees TV series in 1968 He continued to work as a voice performer in the 1970s NBC cartoon series Here Comes the Grump and in the second Addams Family cartoon series. Throughout the 1970s Rip Taylor was a frequent celebrity guest panelist on game shows such as Hollywood Squares, To Tell the Truth, and The Gong Show, and substituted for Charles Nelson Reilly on The Match Game. He became a regular on Sid & Marty Krofft's Sigmund and the Sea Monsters, playing Sheldon, a sea-genie who lived in a conch shell. In addition, Taylor was also a regular on The Brady Bunch Hour, playing a role of neighbor / performer Jack Merrill. He also hosted a short-lived send-up of beauty pageants called The $1.98 Beauty Show created by Gong Show producer/host Chuck Barris, in 1978. Taylor appeared as a celebrity on the slot-machine version of Match Game. On one episode of Super Password in 1988, gameplay went awry after another celebrity guest, Patty Duke, inadvertently gave away the password and host Bert Convy lost control of the show. Taylor reacted to the craziness first by throwing a stool, and then ripped off his toupee, Taylor, in a fit of mock frustration, shouted "That's not fair!" and pulled off his toupee resulting in hysterical laughter from everyone in the studio. This scene has been seen on TV many times since.

Rip Taylor was featured at the end of the 2 part Chalet 2000 skit on the television show The Kids In The Hall. He was referred to as Uncle Rip by one of the show's characters "Buddy Cole". 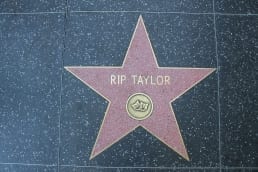