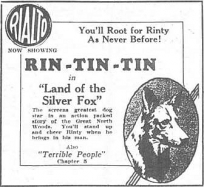 Rin Tin Tin was the name given to several related German Shepherd dogs featured in fictional stories on film, radio and television.

The first of the line was a shell-shocked pup found by American serviceman Lee Duncan in a bombed-out dog kennel in Lorraine, France, less than two months before the end of World War I. He was named for a puppet called Rin tin tin that French children gave to the American soldiers for good luck. The dog returned at war's end with Duncan to his home in Los Angeles, California. In color he was a dark sable, with very dark eyes.

Nicknamed Rinty by his owner, the dog learned tricks and could leap great heights. He was seen performing at a dog show by film producer Charles Jones, who paid Duncan to film Rinty. Duncan became convinced Rin Tin Tin could become the next Strongheart.

The dog's big break came when he stepped in for a recalcitrant wolf in The Man From Hell's River. Rin Tin Tin would be cast as a wolf or wolf-hybrid many times in his career, though not looking like one.