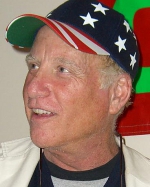 Richard Stephen Dreyfuss is an American actor best known for starring in a number of film, television, and theater roles since the late 1960s, including the films American Graffiti, Jaws, Close Encounters of the Third Kind, The Goodbye Girl, Stakeout, Always, What About Bob?, and Mr. Holland’s Opus.

Dreyfuss was born Richard Stephen Dreyfus in Brooklyn, New York, the son of Norman, an attorney and restaurateur, and Geraldine, a peace activist. Dreyfuss is Jewish and his surname is of Yiddish origin, believed to originate in the German city of Trier, which had a large Jewish population in Late Antiquity and the Middle Ages. The Latin name for the city was “Treveris”, of which Dreyfuss is a variant. He commented that he “grew up thinking that Alfred Dreyfus and are of the same family.” His family moved to California when he was nine.

Dreyfuss’s acting career began during his youth at the Beverly Hills Jewish Center. He debuted in the TV production In Mama’s House when he was fifteen. He attended the San Fernando Valley State College for a year. He was a conscientious objector during the Vietnam War and worked in alternate service for two years as a clerk in a Los Angeles hospital. During this time, he acted in a few small TV roles on shows like Peyton Place, Gidget, Bewitched and The Big Valley. During the late 1960s and early 1970s, he also performed on stage on Broadway, off-Broadway, repertory, and improvisational theater.