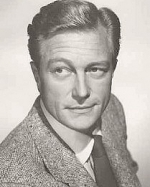 Richard Denning, was an American actor who starred in such movies as Creature from the Black Lagoon and An Affair to Remember, and on radio with Lucille Ball as her husband George Cooper in My Favorite Husband, the forerunner of television’s I Love Lucy, for which Denning was replaced by Ball’s real-life husband, Desi Arnaz.

Denning was born as Louis Albert Heindrich Denninger, Jr. in Poughkeepsie, New York. He became an actor, best-known for his recurring role as Governor of Hawaii Paul Jameson in the CBS series Hawaii Five-O. He also starred as the title character in the detective series Michael Shayne and shared title billing with Barbara Britton in the detective series Mr. and Mrs. North. He appeared three times on the ABC anthology series Crossroads.

According to Denning, after his interrupting his career to enlist in the military during World War II, upon his return he experienced a full 18 months before Paramount Pictures put him back to work. During that time period, Denning and his famiy lived in a mobile home that he alternately parked at Malibu and Palm Springs. His period of unemployment ended when he was hired to star on the radio opposite Lucille Ball in My Favorite Husband.

Denning was already retired and living on the island of Maui with his wife, when producer Leonard Freeman telephoned him with an offer to appear as the Governor in the new series Hawaii Five-O. Freeman guaranteed Denning five-hour days and a four-day work week in order to snag him.