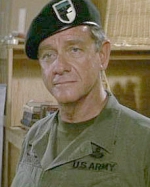 Richard Donald Crenna was an American motion picture, television, and radio actor and occasional television director. He starred in such motion pictures as The Sand Pebbles, Wait Until Dark, Body Heat, the first three Rambo movies, Hot Shots! Part Deux, and The Flamingo Kid. Crenna played “Walter Denton” in the CBS radio and CBS-TV network series Our Miss Brooks, and “Luke McCoy” in ABC’s TV comedy series, The Real McCoys, which moved to CBS-TV in September 1962. Crenna was in one of the few TV political dramatic series Slattery’s People on CBS. Crenna played “Colonel Trautman” in the first three Rambo movies. He also played “Frank Skimmerhorn” in the critically acclaimed mini-series Centennial

Crenna was born in Los Angeles, the son of Edith J. Pollette Crenna, who was a hotel manager in Los Angeles, and Dominick Anthony Crenna, a pharmacist, both of whom were of Italian ancestry. Crenna attended the Virgil Junior High School, followed by Belmont High School in Los Angeles, after which he enrolled in the University of Southern California.

Crenna got his acting start on radio, appearing in My Favorite Husband, Boy Scout Jamboree, A Date With Judy, The Great Gildersleeve, and Our Miss Brooks. He remained with the cast of the latter show when it moved to television.

He guest starred on I Love Lucy with Janet Waldo and on NBC’s 1955-1956 Frontier anthology series in the lead role of the episode entitled “The Ten Days of John Leslie”.