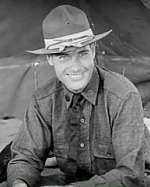 Richard Arlen was an American actor. Born Sylvanus Mattimore in Minnesota, he attended the University of Pennsylvania. He served as a pilot in the Royal Canadian Air Force during World War I. His first job after the war was with St. Paul’s Athletic Club. Then he went to the oilfields of Texas and Oklahoma and then found work as a tool boy, a messenger and sporting editor of a newspaper before going to Los Angeles to star in films but no producer wanted him. He was a delivery boy for a film laboratory when the motor cycle he was riding landed him a broken leg outside the Paramount Film Studios. A sympathetic film director gave him his start as an extra. He appeared at first in silent films before making the transition to talkies. His first important film role was in Vengeance of the Deep. He married Jobyna Ralston in 1927.

He took time out from his Hollywood career to teach as a United States Army Air Forces flight instructor in World War II.

Arlen is best known for his role as a pilot in the Academy Award-winning Wings with Clara Bow, Charles ‘Buddy’ Rogers, and his future first wife Jobyna Ralston.

For his contribution to the motion picture industry, Richard Arlen has a star on the Hollywood Walk of Fame at 6753 Hollywood Blvd.