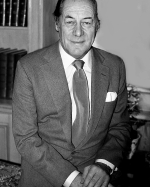 Sir Reginald ?Rex? Carey Harrison was an English actor of stage and screen. Harrison won both an Academy Award and a Tony Award.

Harrison was born in Huyton, then part of Lancashire, and educated at Liverpool College.

After a bout of childhood measles, Harrison lost most of the sight in his left eye, which on one occasion caused some on-stage difficulty. He first appeared on the stage in 1924 in Liverpool. Harrison’s acting career was interrupted during World War II whilst he served in the Royal Air Force, reaching the rank of Flight Lieutenant. He acted in various stage productions until 11 May 1990. He acted in the West End of London when he was young, appearing in the Terence Rattigan play French Without Tears, which proved to be his breakthrough role.

He alternated appearances in London and New York in such plays as Bell, Book and Candle, Venus Observed, The Cocktail Party, The Kingfisher, and The Love of Four Colonels, which he also directed. He won his first Tony Award for his appearance as Henry VIII in Anne of the Thousand Days and international superstardom for his Henry Higgins in the musical My Fair Lady, in which he appeared opposite a young Julie Andrews. Later appearances included ‘s Pirandello’s Enrico IV, a 1984 appearance at the Haymarket Theatre with Claudette Colbert in Frederick Lonsdale’s Aren’t We All?, and one on Broadway at the Brooks Atkinson Theatre presented by Douglas Urbanski, at the Haymarket in J. M. Barrie’s The Admirable Crichton with Edward Fox. He returned as Henry Higgins in a highly paid revival of My Fair Lady directed by Patrick Garland in 1981, cementing his association with the plays of George Bernard Shaw which included a Tony nominated performance as Shotover in Heartbreak House, Julius Caesar in Caesar and Cleopatra, and General Burgoyne in a Los Angeles production of The Devil’s Disciple.