Renata Tebaldi was an Italian lirico-spinto soprano popular in the post-war period. Acclaimed as one of the most beloved opera singers of all time, she primarily focused on the verismo roles of the lyric and dramatic repertoires.

Tebaldi was born Renata Ersilia Clotilde Tebaldi in Pesaro, the daughter of a cellist, Teobaldo Tebaldi, and Giuseppina Barbieri, a gifted singer who had wanted a singing career but eventually became a nurse instead. Very soon, the parents split up and Renata, together with her mother, moved to the latter's home town, Langhirano in the Province of Parma.

Stricken with polio at the age of three, Tebaldi was unable to take part in strenuous activities and instead became interested in music. She was a member of the church choir in Langhirano and her mother sent her to piano lessons with Signorina Passani in Parma at the age of thirteen; she worked with boundless diligence, practising four or five hours a day and dreaming of a career as a concert pianist. She also sang everything she heard. Her main source of inspiration was listening to the radio. It was not until her piano teacher took the initiative that Renata was sent to Italo Brancucci, a singing teacher at the conservatory of Parma. She began studying a short time later at the conservatory, taking lessons with Ettore Campogalliani for three years. Renata had to concentrate on scales and voice training for two years before she was allowed to learn the first songs towards the end of her second year of training.

She went off to spend a Christmas holiday with her father's brother, her uncle Valentino, at Pesaro. There, as operatic destiny would have it, Valentino owned a small café where the famous former diva Carmen Melis came to buy pastries. Melis was a teacher at the Pesaro Conservatory. Valentino talked to Melis about his niece, and the diva finally consented to audition the young girl. Melis had been a soprano prima donna at La Scala in Milan and had sung with Caruso and Titta Ruffo. 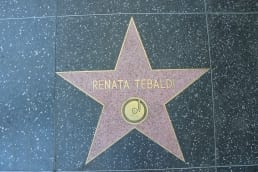