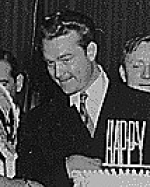 Red Skelton was an American comedian who was best known as a top radio and television star from 1937 to 1971. Skelton’s show business career began in his teens as a circus clown and went on to vaudeville, Broadway, films, radio, TV, night clubs and casinos, all while pursuing another career as a painter.

Born in Vincennes, Indiana, Richard Skelton was the son of Joseph E. Skelton, who died in 1913 shortly before the birth of his son, and Ida Skelton. In Skelton’s lifetime there was some dispute about the year of his birth. Biographer Arthur Marx reported that Skelton may have been born as early as 1906, and the year 1910 was sometimes cited as the year of his birth. In a People Magazine article in 1979, Skelton admitted that he fudged about his age, and was quoted as saying he was “in his seventies.”

Skelton got one of his earliest tastes of show business with the circus as a teenager. Before that, he caught the show business bug at 10 years of age from entertainer Ed Wynn, who spotted him selling newspapers in front of the Pantheon Theatre, in Vincennes. After buying every newspaper Skelton had, Wynn took him backstage and introduced him to members of the show with which he was traveling. By age 15, Skelton had hit the road full-time as an entertainer, working everywhere from medicine shows and vaudeville to burlesque, showboats, minstrel shows and circuses. While performing in Kansas City, in 1930, Skelton met and married his first wife, Edna Stillwell. The couple divorced 13 years later, but Stillwell remained one of his chief writers.

Skelton caught his big break into two media at once: radio and film. In 1938 he made his film debut for RKO Radio Pictures in the supporting role of a camp counselor in Having Wonderful Time. Two short subjects followed for Vitaphone, in 1939: Seeing Red and The Bashful Buckaroo.