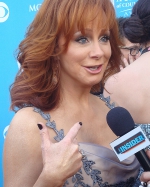 Reba Nell McEntire is an American country music artist. She began her career in the music industry singing with her siblings on local radio shows and rodeos. As a solo act, she was invited to perform at a rodeo in Oklahoma City, which caught the attention of country artist Red Steagall. He brought her to Nashville, Tennessee, where she eventually signed a contract with Mercury Records in 1975. She released her first solo album in 1977 and released five additional studio albums under the label until 1983.

Signing with MCA Nashville Records, McEntire took creative control over her second MCA album, My Kind of Country, which had a more traditional country sound and produced two number one singles: “How Blue” and “Somebody Should Leave”. The album brought her breakthrough success, bringing her a series of successful albums and number one singles in the 1980s and 1990s. McEntire has since released 25 studio albums, acquired 34 #1 singles, and 28 albums have been certified Gold, Platinum or Multi-Platinum in sales by the Recording Industry Association of America. Her album For My Broken Heart broke ground for female artists in country music, as it was the first album recorded by a female in country music to be certified double-platinum by the RIAA.

In the early 1990s, McEntire branched into film starting with 1990’s Tremors. She has since starred in the Broadway revival of Annie Get Your Gun and starred in her television sitcom, Reba for which she was nominated for the Golden Globe Award for Best Performance by an Actress in a Television Series?Musical or Comedy. She has sometimes been referred to as “The Queen of Country”, having sold 41 million records in the United States and more than 56 million worldwide. In the United States, she ranks as the seventh best-selling female artist in all genres and is the second best-selling female country artist of all time.

Reba Nell McEntire was born on March 28, 1955, outside of Kiowa, Oklahoma to Jacqueline Smith and Clark Vincent McEntire. Her father and grandfather were champion steer ropers and her father was a World Champion Steer Roper three times. Her mother originally had plans to become a country music artist but decided not to pursue that professionally and worked as a schoolteacher. Instead, McEntire’s mother taught her children how to sing. On car rides home from her father’s rodeo trips, the McEntire siblings were taught songs and learned their own harmonies, eventually forming a vocal group called the “Singing McEntires”. Consisting of her brother, Pake, and her younger sister, Susie, the group sang at rodeos and recorded “The Ballad of John McEntire” together. Released on an Indie label, Boss, the song pressed one thousand copies. In 1974, McEntire attended Southeastern Oklahoma State University and intended on becoming an elementary school teacher. While not attending school, she also continued to sing locally. That same year she was also invited to perform the national anthem at an Oklahoma City rodeo. At the rodeo, country artist Red Steagall was impressed by her vocal ability and offered his help in making McEntire a country artist in Nashville, Tennessee. After recording a demo tape, she eventually signed a recording contract with Mercury Records in 1975.