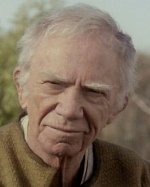 Ray Walston was an American stage, television and film actor best known as the title character on the 1960s situation comedy My Favorite Martian. In addition, he was also known for his role as high school teacher Mr. Hand in the 1982 film Fast Times at Ridgemont High and Judge Henry Bone on the drama series Picket Fences.

Walston was born Herman Walston in New Orleans, Louisiana to working-class parents Mittie and Harry Norman Walston, a lumber man. He started acting at an early age, beginning his tenure as a “spear carrier” rounding out productions at many New Orleans theaters. He mostly played small roles with stock companies, where he not only starred in travelling shows but also worked at a movie theater, selling tickets and cleaning the stage floors. His family moved to Houston, Texas, where he joined the Houston Civic Theater’s repertory company under Margo Jones, debuting in 1938.

Walston was very popular with Margo Jones’s team of actors before he travelled to Cleveland, Ohio, where he spent three years with the Cleveland Playhouse. He then traveled to New York City, where he made his Broadway debut in a 1945 production of Hamlet. In 1949, he appeared in the short-lived play Mrs. Gibbons’ Boys directed by George Abbott, who later cast him as Satan in the musical Damn Yankees opposite Gwen Verdon as his sexy aide Lola. The chemistry between the two was such that they both garnered critical success and won awards for their roles. After a decade in New York theater, he won a Tony Award, and he and Verdon were invited to reprise their roles in the 1958 film version.

Additional Broadway credits included The Front Page, Summer and Smoke, King Richard III, Wish You Were Here, and House of Flowers. Walston had a prominent role in the Rodgers & Hammerstein musical Me and Juliet, portraying the stage manager of the musical-within-the-musical, but his character did not participate in any of the musical numbers.