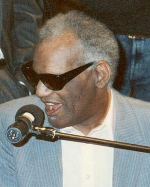 Ray Charles Robinson, better known by his shortened stage name Ray Charles, was an American musician. Ray was a pioneer in the genre of soul music during the 1950s by fusing rhythm & blues, gospel, and blues styles into his early recordings with Atlantic Records. He also helped racially integrate country and pop music during the 1960s with his crossover success on ABC Records, most notably with his Modern Sounds albums. While with ABC, Charles became one of the first African-American musicians to be given artistic control by a mainstream record company.

Rolling Stone ranked Charles number 10 on their list of "100 Greatest Artists of All Time" in 2004, and number two on their November 2008 list of "100 Greatest Singers of All Time". In honoring Charles, Billy Joel noted: "This may sound like sacrilege, but I think Ray Charles was more important than Elvis Presley. I don't know if Ray was the architect of rock & roll, but he was certainly the first guy to do a lot of things. . Who the hell ever put so many styles together and made it work?"

Ray Charles Robinson was the son of Aretha Williams, a sharecropper, and Bailey Robinson, a railroad repair man, mechanic and handyman. Aretha Williams was a devout Christian and the family attended the New Shiloh Baptist Church. When Ray was an infant, his family moved from Albany, Georgia, where he was born, to the poor black community of Jellyroll on the western side of Greenville, Florida.

In his early years, Charles showed a curiosity for mechanical things and he often watched the neighborhood men working on their cars and farm machinery. His musical curiosity was sparked at Mr. Wiley Pit's Red Wing Cafe when Pit played boogie woogie on an old upright piano. Pit would care for George, Ray's brother, so as to take the burden off Williams. However, George drowned in the Williams' wash tub when he was four years old.