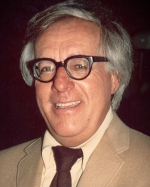 Raymond Douglas “Ray” Bradbury is an American fantasy, horror, science fiction, and mystery writer. Best known for his dystopian novel Fahrenheit 451 and for the science fiction stories gathered together as The Martian Chronicles and The Illustrated Man, Bradbury is one of the most celebrated among 20th and 21st century American writers of speculative fiction. Many of Bradbury’s works have been adapted into television shows or films.

Bradbury was born in Waukegan, Illinois, to a Swedish immigrant mother and a father who was a power and telephone lineman. His paternal grandfather and great-grandfather were newspaper publishers. He is also somewhat distantly related to the American Spalding family, owners of the famous Spalding sports equipment company. His central character Douglas Spaulding, from the novel Dandelion Wine, was reportedly drawn from this heritage. He is also reputedly related to the American Shakespeare scholar Douglas Spaulding.

Bradbury was a reader and writer throughout his youth, spending much time in the Carnegie library in Waukegan, Illinois. He used this library as a setting for much of his novel Something Wicked This Way Comes, and depicted Waukegan as “Green Town” in some of his other semi-autobiographical novels?Dandelion Wine, Farewell Summer?as well as in many of his short stories.

He attributes his lifelong habit of writing every day to an incident in 1932 when a carnival entertainer, Mr. Electrico, touched him on the nose with an electrified sword, made his hair stand on end, and shouted, “Live forever!” It was from then that Bradbury wanted to live forever and decided on his career as an author in order to do what he was told: live forever. It was at that age that Bradbury first started to do magic. Magic was his first great love. If he had not discovered writing, he would have become a magician.