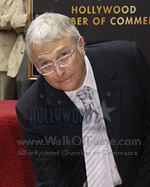 Composer Randy Newman was honored with the 2,411th star on the Hollywood Walk of Fame. Leron Gubler, President and CEO of the Hollywood Chamber of Commerce, presided over the ceremony. Guests included John Lasseter, Eric Idle, and Woody and Buzz Lightyear from Toy Story. HOLLYWOOD LOVES RANDY NEWMAN!

Randy Newman is an Oscar®-, Grammy®- and Emmy®-winning composer and songwriter whose numerous film credits include "James and the Giant Peach" (1996), "A Bug's Life," "Monsters, Inc." and "Cars." Earlier this year, he received two Oscar® nominations in the Best Song category for his contribution to Disney's acclaimed animated feature, "The Princess & the Frog."

Newman has been nominated for 19 Academy Awards® including two each for "Ragtime" (1981), "Monsters, Inc." and "Toy Story." He won his first Oscar® in 2002 for the song "If I Didn't Have You" from "Monsters Inc." The song also earned him his second of five Grammy Awards®. Newman's song "When She Loved Me," written for "Toy Story 2," won a Grammy for Best Song Written for a Motion Picture, Television or other Visual Media.

Newman's other film scores include "The Natural," "Avalon," "Parenthood," "Seabiscuit," "Awakenings," "The Paper," "Pleasantville," "Meet the Parents" and "Meet the Fockers." He has also written songs for television, including the Emmy Award®-winning "Monk" theme song, "It's a Jungle Out There."

The multi-talented Newman co-wrote the screenplay for "Three Amigos!" (1986) with Steve Martin and Lorne Michaels and also wrote three songs for the film.

Born in 1943 into a famously musical family, Newman began his professional songwriting career at 17, knocking out tunes for a Los Angeles publishing house. His uncles Alfred, Lionel and Emil were all well-respected film composers and conductors. His father Irving Newman&mdash;a prominent physician&mdash;wrote a song for Bing Crosby.

In 1968, Newman made his recording debut with the lushly orchestrated album "Randy Newman." Before long, his extraordinary and evocative compositions were being covered by a wide range of top artists, from Pat Boone and Peggy Lee to Ray Charles and Wilson Pickett.

Critics raved about his 1970 sophomore effort "12 Songs," and increasingly the public started to take notice of his sly, satirical songwriting with albums such as 1970's "Live," the 1972 classic "Sail Away" and the acclaimed and provocative 1974 release, "Good Old Boys." His 1977 album, "Little Criminals," included the left-field smash hit "Short People." His song, "I Love L.A." is a popular standard here in Los Angeles.

In the 1980s, Newman divided his time between film composing and recording his own albums, including 1988's "Land of Dreams," another breakthrough work marked by some of his most personal and powerful work.

The '90s saw the release of Newman's comedic take on "Faust," which included performances by Don Henley, Elton John, Bonnie Raitt, Linda Ronstadt and James Taylor, the compilation "Guilty: 30 Years of Randy Newman," and a 1999 album for DreamWorks, "Bad Love."

Newman's studio album "Harps and Angels" was produced by Mitchell Froom and Lenny Waronker and released in August 2008.