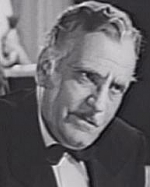 Ralph Morgan was a Hollywood film, stage and character actor, and the older brother of Frank Morgan. Born in New York City as Raphael Kuhner Wuppermann, Ralph Morgan graduated from Columbia University with a law degree. However, he abandoned the world of jurisprudence for the vocation of journeyman actor, having already appeared in Columbia’s annual Varsity Show. Morgan became so successful in stock and on Broadway that his younger brother, Frank, was encouraged to give acting a try. Frank’s career would eventually overshadow that of his elder brother.

Ralph Morgan made his film debut in silent films in 1915 appearing in several production made on the East Coast. In the early talkie era he played such leading roles in such productions as Strange Interlude in 1932 and Rasputin and the Empress also in 1932. He later settled into secondary character parts. His quiet, dignified demeanor on screen was often employed for murder mysteries in which, more often than not, he would be exposed in the last reel as the killer. One of his memorable roles was in the 1942 serial Gang Busters, in which he played a brilliant surgeon turned master criminal. Morgan later worked in television, frequently in religious dramas filmed for Family Theater.

Among off-camera activities, he was also a founder, charter member and onetime president of the Screen Actors Guild.