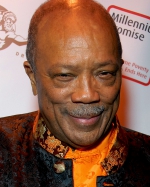 Quincy Delightt Jones, Jr. is an American music conductor, record producer, musical arranger, film composer, television producer, and trumpeter. During five decades in the entertainment industry, Jones has earned a record 79 Grammy Award nominations, 27 Grammys, including a Grammy Legend Award in 1991. He is best known as the producer of the album Thriller, by pop icon Michael Jackson, which has sold over 110 million copies worldwide, and as the producer and conductor of the charity song ?We Are the World?.

In 1968, Jones and his songwriting partner Bob Russell became the first African-Americans to be nominated for an Academy Award in the “Best Original Song” category. That same year, he became the first African-American to be nominated twice within the same year when he was nominated for “Best Original Score” for his work on the music of the 1967 film In Cold Blood. In 1971 Jones would receive the honor of becoming the first African American to be named musical director/conductor of the Academy Awards ceremony. He was the first African-American to win the Academy’s Jean Hersholt Humanitarian Award, in 1995. He is tied with sound designer Willie D. Burton as the most Oscar-nominated African American, each of them having seven nominations. At the 2008 BET Awards, Quincy Jones was presented with the Humanitarian Award. He was played by Larenz Tate in the 2004 biopic about Ray Charles, Ray.

Jones was born in Chicago, the oldest son of Sarah Frances, an apartment complex manager and bank executive who suffered from schizophrenia, and Quincy Delightt Jones, Sr., a semi-professional baseball player and carpenter. Jones discovered music in grade school at Raymond Elementary School on Chicago’s South Side and took up the trumpet. When he was 10, his family moved to Bremerton, Washington and he attended Seattle’s Garfield High School. It was in Seattle that Jones first met the three years older Ray Charles. He then attended Somerset Academy.

In 1951, Jones won a scholarship to the Schillinger House in Boston, Massachusetts. However, he abandoned his studies when he received an offer to tour as a trumpeter with the bandleader Lionel Hampton. While Jones was on the road with Hampton, he displayed a gift for arranging songs. Jones relocated to New York City, where he received a number of freelance commissions arranging songs for artists like Sarah Vaughan, Dinah Washington, Count Basie, Duke Ellington, Gene Krupa, and his close friend Ray Charles.