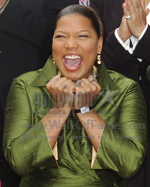 Queen Latifah was born and raised in Newark, New Jersey, the daughter of Rita, a schoolteacher who worked at Irvington High School, and Lancelot Owens, Sr., a police officer. Her parents divorced when Latifah was ten. Latifah was raised in the Baptist church and she attended Catholic school in Newark, New Jersey. Her stage name, Latifah, meaning “delicate” and “very kind” in Arabic, was given to her by her cousin when she was eight. Always a tall girl, the 5’10” tall Latifah was a power forward on her high school basketball team. She performed the number “Home” from the musical The Wiz in a high school play.

Latifah started beatboxing for the rap group Ladies Fresh. Latifah was one of the members of the original version of the Flavor Unit, which, at that time, was a crew of MCs grouped around producer DJ Mark the 45 King. Mark James aka “DJ Mark the 45 King” made a demo recording of Queen Latifah’s rap Princess of the Posse. He gave the recording to the host of Yo! MTV Raps Fab 5 Freddy. The song got the attention of Tommy Boy Music employee Dante Ross, who signed Latifah and in 1988 issued her first single, “Wrath of My Madness”.

Freddy helped Latifah sign with Tommy Boy Records, which released Latifah’s first album All Hail the Queen in 1989, when she was nineteen. That year, she appeared as Referee on the UK label Music of Life album “1989?The Hustlers Convention “. In 1998, Co Produced by Ro Smith, now CEO of Def Ro Inc., she released her fourth hip-hop album Order in the Court.