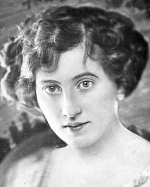 Polly Moran was an American actress and comedian.

Born in Chicago, Illinois, Moran started out in vaudeville, and toured all over the world including Europe and South Africa. She left vaudeville in 1914 after signing for Mack Sennett at Keystone Studios. She proved effective at slapstick and remained with Sennett for several years until she was signed by MGM. She partnered with the famous Broadway star Marie Dressler in The Callahans and the Murphys, and the two went on to appear in several films together such as Chasing Rainbows and Caught Short. After Dressler’s death in 1934 Moran’s career declined, and she only starred in low budget comedies or B-movies, though she still maintained an active Hollywood social life, throwing large and well-publicized parties.

Moran made a comeback after co-starring in Adam’s Rib. She died of cardiovascular disease in 1952.