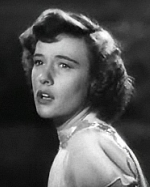 Phyllis Thaxter is an American actress. Born as Phyllis St. Felix Thaxter, she was the daughter of Maine Supreme Court Justice Sidney Thaxter, and his wife, a former actress. Phyllis Thaxter worked as a Broadway actress in the 1930s and eventually signed an MGM contract in 1944. Her movie debut was opposite Van Johnson in the war-time film Thirty Seconds Over Tokyo.

At MGM, she usually played the ever-patient wife to a number of leading men, including Van Heflin in Act of Violence. In 1948 she played a cattle owner’s daughter alongside Barbara Bel Geddes in Blood on the Moon. She changed studios in the 1950s, moving to Warner Brothers, but usually played the same type of roles.

Thaxter’s career stalled after an attack of infantile paralysis, while visiting her family in Portland, in 1952. She, however, made a slow comeback in character parts in television including the The Twilight Zone episode ‘Young Man’s Fancy’ in 1962, movies and the stage. In 1978, Thaxter was cast along with Glenn Ford as Ma and Pa Kent in Superman.