Phil Harris was an American singer, songwriter, jazz musician, actor and comedian. Though successful as an orchestra leader, Harris is remembered today for his recordings as a vocalist, his voice work in animation and as a pioneer in radio situation comedy, first with Jack Benny, and then in a series in which he co-starred with his second wife, singer-actress Alice Faye, for eight years.

Harris was born in Linton, Indiana but grew up in Nashville, Tennessee, and identified himself as a Southerner. His upbringing accounted for both his trace of a Southern accent and, in later years, the self-deprecating Southern jokes of his radio character. The son of two circus performers, Harris’ first work as a drummer came when his father, as tent bandleader, hired him to play with the circus band. Harris began his music career as a drummer in San Francisco, forming an orchestra with Carol Lofner in the latter 1920s and starting a long engagement at the St. Francis Hotel. The partnership ended by 1932, and Harris led and sang with his own band, now based in Los Angeles. Phil Harris also played drums in Henry Halstead Big Band Orchestra in the mid 1920s.

On September 2, 1927, he married actress Marcia Ralston in Sydney, Australia; they had met when he played a concert date. The couple adopted a son, Phil Harris, Jr., but they divorced in September, 1940. 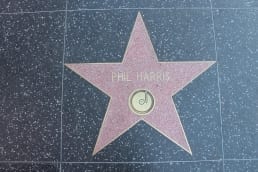