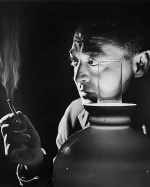 Peter Lorre was an Austrian-American actor frequently typecast as a sinister foreigner.

He caused an international sensation in 1931 with his portrayal of a serial killer who preys on little girls in the German film M. Later he became a popular featured player in Hollywood crime films and mysteries, notably alongside Humphrey Bogart and Sydney Greenstreet, and as the star of the successful Mr. Moto detective series.

Lorre was born as László Löwenstein into a Jewish family in Rózsahegy, Rosenberg, Kingdom of Hungary, part of Austria-Hungary, now Ru?omberok, Slovakia. His parents were Alois and Elvira. When he was a child his family moved to Vienna where Lorre attended school. He began acting on stage in Vienna at the age of 17, where he worked with Richard Teschner, then moved to Breslau, and Zürich. In the late 1920s, the young actor moved to Berlin where he worked with German playwright Bertolt Brecht, most notably in his Mann ist Mann. He also appeared as Dr. Nakamura in the infamous musical Happy End by Brecht and composer Kurt Weill, alongside Brecht’s wife Helene Weigel and other impressive co-stars such as Carola Neher, Oskar Homolka and Kurt Gerron. The German-speaking actor became famous when Fritz Lang cast him as a child killer in his 1931 film M.

When the Nazis came to power in Germany in 1933, Lorre took refuge first in Paris and then London where he was noticed by Ivor Montagu, Alfred Hitchcock’s associate producer for The Man Who Knew Too Much, who reminded the director about Lorre’s performance in M. They first considered him to play the assassin in the film, but wanted to use him in a larger role, despite his limited command of English, which Lorre overcame by learning much of his part phonetically.