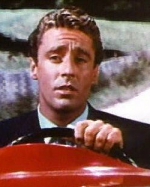 Peter Sydney Vaughn Aylen, better known as Peter Lawford, was an English-American actor. He was a member of the “Rat Pack,” and brother-in-law to President John F. Kennedy, perhaps more noted in later years for his off-screen activities as a celebrity than for his acting. In his earlier professional years he had a strong presence in popular culture and starred in a number of highly-acclaimed films.

Born in London, he was the son of English World War I veteran Sir Sydney Turing Barlow Lawford and May Somerville Bunny. At the time of his birth, May Somerville Bunny was married to Captain Ernest Vaughn Aylen. After his birth, Bunny confessed to Aylen that the child was not his, and he promptly divorced her. Sir Sydney Lawford and Bunny were married in September 1924.

Lawford spent his early childhood in France and owing to his family’s travels, was never formally educated. In America, Sir Sydney and Lady Lawford were treated as royalty among the well-to-do in their new neighbourhood of Palm Beach, Florida, and were always invited to events and social occasions. However, they lost whatever source of money they had when war was declared by the UK in 1939.

At the age of 14, Lawford severely injured his right arm when it went through a glass door. The injury greatly compromised the use of his lower arm and hand with irreversible nerve damage, which he later learned to hide. The injury was considered damaging enough to keep him from entering World War II, but this turn of fate was probably the greatest boon to his career. At that time, Hollywood was infatuated with heroic Englishmen, and as war films were being churned out by the dozens and American actors volunteered or were drafted for the war, Lawford put his talents to work “”.