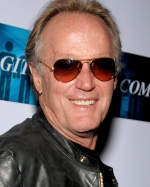 Peter Henry Fonda is an American actor. He is the son of Henry Fonda, the brother of Jane Fonda, and the father of Bridget and Justin Fonda. Fonda is an icon of the counterculture of the 1960s.

Fonda was born in New York City, New York, the son of actor Henry Fonda and his wife Frances Ford Seymour; he is the younger brother of actress Jane Fonda.

On his eleventh birthday, he accidentally shot himself in the stomach and nearly died. Years later, he would reference this incident to John Lennon claiming "I know what it's like to be dead", which ended up becoming an indirect influence behind the Beatles song "She Said, She Said".

Early on, Fonda studied acting in Omaha, Nebraska, his father's home town. He began attending the University of Nebraska at Omaha and joined the Omaha Community Playhouse, where many actors had begun their careers.