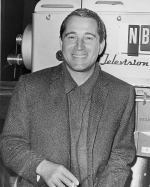 Pierino Ronald "Perry" Como was an American singer and television personality. During a career spanning more than half a century he recorded exclusively for the RCA Victor label after signing with it in 1943. "Mr. C.", as he was nicknamed, sold millions of records for Radio Corporation of America and pioneered a weekly musical variety television show, which set the standards for the genre and proved to be one of the most successful in television history. His combined success on television and popular recordings was not matched by any other artist of the time. A popular television performer and recording artist, Perry Como produced numerous hit records with record sales so high the label literally stopped counting at Como's behest. His weekly television shows and seasonal specials were broadcast throughout the world and his popularity seemingly had no geographical or language boundaries. Como's appeal spanned generations and he was widely respected for both his professional standards and the conduct in his personal life. In the official RCA Records Billboard magazine memorial, his life was summed up in these few words: "50 years of music and a life well lived. An example to all." Composer Ervin Drake said of him,". ccasionally someone like Perry comes along and won't 'go with the flow' and still prevails in spite of all the bankrupt others who surround him and importune him to yield to their values. Only occasionally."

One of the many factors in his success was Como's insistence on his principles of good taste; if he considered something to be in bad or poor taste, it wasn't in the show or broadcast. While his performance of "Ave Maria" was a tradition of his holiday television programs, Como refused to sing it at live performances, saying, "It's not the time or place to do it.", even though it was the number one request of his audiences. Another was his naturalness; the man viewers saw on the screen was the same person who could be encountered behind a supermarket shopping cart, at a bowling alley, or in a kitchen making breakfast. From his first Chesterfield Supper Club television show, if scripts were written at all, they were based on the way Como would say something. Como was not devoid of a temper, and it could be seen at times as a result of the frustrations of daily life. His music director from 1948 &ndash; 1963, Mitchell Ayres, said, "Perry has a temper like everyone else. And he loses his temper at the normal things everyone else does. When we're driving, for instance, and somebody cuts him off, he really lets the offender have it."

Como received five Emmys from 1955 to 1959, a Christopher Award and shared a Peabody Award with good friend Jackie Gleason in 1956. He was inducted into the Academy of Television Arts & Sciences Hall of Fame in 1990 and received a Kennedy Center Honor in 1987. Posthumously, Como received the Grammy Lifetime Achievement Award in 2002; he was inducted into the Long Island Music Hall of Fame in 2006 and the Hit Parade Hall of Fame in 2007. Como has the distinction of having three stars on the Hollywood Walk of Fame for his work in radio, television, and music. Bing Crosby once described him as, "the man who invented casual".

Como was born in Canonsburg, Pennsylvania, 18 miles southwest of Pittsburgh, seventh of the 13 children of Pietro Como, and Lucia Travaglini ,