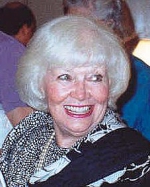 During her sixty year career, Singleton appeared in films and television, most frequently as the comic strip heroine, Blondie Bumstead in a series of 28 motion pictures, from 1938 until 1950, and the popular Blondie radio program from 1939 until 1950.

She also provided the voice of Jane Jetson in the animated series, The Jetsons.

Born Marianna Dorothy Agnes Letitia McNulty in Philadelphia, Pennsylvania, and known as Dorothy McNulty, she was the daughter of an Irish-American newspaperman, Benny McNulty – from whom she received the nickname ‘Penny’. She began her show business career as a child by singing at a silent movie theater, and toured in vaudeville as part of an act called The Kiddie Kabaret. She sang and danced with Milton Berle, whom she had known since childhood, and actor Gene Raymond, and appeared on Broadway in Jack Benny’s Great Temptations.