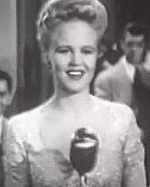 Peggy Lee was an American jazz and popular music singer, songwriter, composer and actress in a career spanning nearly seven decades. From her beginnings as a vocalist on local radio, to singing with Benny Goodman’s big band, she was forging her own sophisticated persona, Lee evolved into a multi-faceted artist and performer. She wrote music for films, acted, and created conceptual record albums?encompassing poetry, jazz, chamber pop, art songs, and other genres.

Lee had Norwegian and Swedish ancestry, and was born Norma Deloris Egstrom in Jamestown, North Dakota, the seventh of eight children of Marvin Egstrom, a station agent for the Midland Continental Railroad. Her mother died when she was four years old. She sang professionally with KOVC radio in Valley City, North Dakota. She later had her own series on a radio show sponsored by a local restaurant that paid her a “salary” in food. Both during and after her high school years Lee sang for paltry sums on local radio stations. Radio personality Ken Kennedy of WDAY in Fargo changed her name from Norma to Peggy Lee. Lee left home and traveled to Los Angeles at the age of 17.

She returned to North Dakota for a tonsillectomy and eventually made her way to Chicago for a gig at The Buttery Room, a nightclub in the Ambassador Hotel West, where she drew the attention of Benny Goodman, the jazz clarinetist and band leader. According to Lee, “Benny’s then-fiancée, Lady Alice Duckworth, came into The Buttery, and she was very impressed. So the next evening she brought Benny in, because they were looking for replacement for Helen Forrest. And although I didn’t know, I was it. He was looking at me strangely, I thought, but it was just his preoccupied way of looking. I thought that he didn’t like me at first, but it just was that he was preoccupied with what he was hearing.” She joined his band in 1941 and stayed for two years.

In early 1942, Lee had her first #1 hit, “Somebody Else Is Taking My Place”, followed by 1943’s “Why Don’t You Do Right?”, which sold over a million copies and made her famous. She sang with Goodman in two 1943 films, Stage Door Canteen and The Powers Girl.