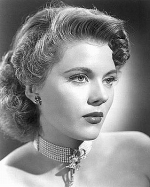 Peggie Castle was an American actress who specialized in playing the “other woman” in B-movies. She was also billed under the names Peggy Castle and Peggie Call.

Born Peggy Blair in Appalachia, Virginia, Castle was discovered by a talent scout while eating in a restaurant in Beverly Hills. She appeared in such films as Payment on Demand, 99 River Street, I, the Jury, Invasion U.S.A., and Arrivederci Roma. Castle then moved to television, where she played the major character Lily Merrill in the television western series Lawman from 1959 to 1962.

Castle retired from acting after she married director William McGarry in 1964; she was married four times overall. She subsequently became an alcoholic and died at the age of forty-five of cirrhosis of the liver.